Your child will make a vowel say its name using the silent e rule.

Before you begin, choose 10 words from the list in Tips. Write each word on a notecard; for example cape. Then fold the card so the e is behind the card to make the word cap. Do this for each card. 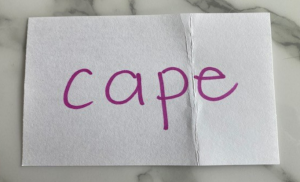 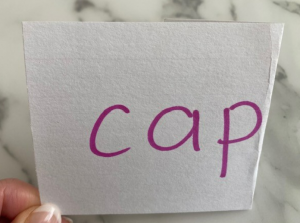 To get started, tell your child, “Today we are going to use a letter in the alphabet that has the power to change a vowel sound in a word.” Show the first word and ask your child to read it. Assist as needed. Explain, “In the word cap, we hear the short a sound /a/ like the sound it makes in apple.”

Then unfold the notecard to show the e but do not read the new word, cape. Explain how the silent e works. You can say, “This is silent e. It doesn’t have a sound in this word, but the letter e at the end of a word has the power to make the vowel before it says its name. When a vowel says its name, we call that a long vowel sound. In this word, the e can send its power over to the vowel a and make it say /A/ like in the word ape.” Point to the a. “In this new word, the a will say /A/.” Ask your child to read the new word.

“Let’s try this with some more words. You can say the vowel sound and read the first word. Next, you can unfold the silent e and use its power to make the vowel say its name. And then you can read the new word.” After your child has completed the word list you chose, ask them to go back and reread each word with the silent e.